The Last Day of Peter Shintani

Mt. Washington in the White Mountains of New Hampshire is infamous as the home of the worst weather on earth; many have perished hiking in its subarctic climate.  On average, the wind exceeds hurricane force on more than a hundred days each year, and storms can develop quite suddenly and dramatically. That being said, the mountain can be hiked safely with some training and preparation.

The first time I climbed Mt. Washington, I took a misstep on a wet ledge and began an out-of-control slide. Fortunately, the angle of the ledge tilted toward the sidewall into which I slammed. Rather than dropping off the edge, I regained my footing; incredibly, I was uninjured.

This June we hiked up a trail on the other side of Mt. Washington. About two hours into our climb, the trail crossed another wet ledge. A couple hiking ahead of us was tentative; they invited us to go first. I decided to crawl across on my hands and knees while grasping the sidewall. Seeing me crawl was enough for the other couple; they wisely decided to turn back. I say wisely because both my wife and I had already noticed that they did not seem fit enough to complete the climb.

Peter Shintani perished climbing Mt. Washington approximately one week before our hike. The day we climbed, search teams and helicopters were scouring the vast and rugged terrain in an attempt to find him. Peter, a Canadian, had a lifetime of outdoors experience and was 70 when he died. He had planned to summit Mt. Washington one year ago, but had had to abort his climb. When he began his hike one day this June, the morning sky was clear. By the afternoon rain had arrived; a half inch of rain fell. The facts that are known suggest that Peter was probably above treeline when the rains came in. I know from experience how wind and rain hamper visibility on a mountain; it is easy to lose your way in a storm. 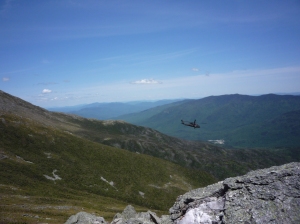 A helicopter searches for Peter Shintani

The search teams did not know which trail Peter took up Mt. Washington; after days, the search was abandoned. His body was found in July a couple of hundred yards off the Lion Head Trail—the same trail we hiked in June. 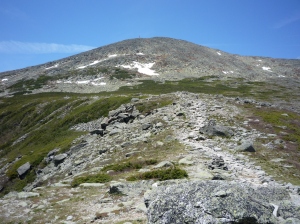 The area below the summit where Peter's body was found

The morning of his fatal hike, Peter observed the sunrise and wrote about it in his journal, which was later found in his car. We can assume that Peter had no idea his death was imminent. In his book The Untethered Soul, Michael Singer asked this question: “Do you realize that what you’re doing at any moment is something that someone was doing when they died?”

Singer encourages us to reflect on how our priorities would change if we understood we would die within a week or a month. As we ponder our priorities, he asks this question: “If that’s really what you would do with your last week, what are you doing with the rest of your time?” 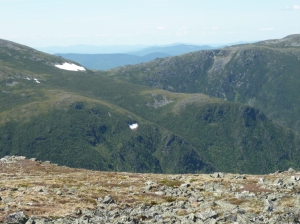 The views not far from the summit of Mt. Washington are spectacular

But mostly, I like the honest day’s work doing something that I love to do. It is an honest day’s work; even when I’m exhausted, I must continue to put one foot in front of the other in order to complete my task. When I’m distracted by my thoughts—my ego’s views about this and that or ruminating about the past and future—I subtract needed energy from the physical task at hand. A strenuous hike limits the wanderings of my mind. To be sure, there are things other than hiking that I regularly do, such as teaching, where my ego’s noise fades to the background. But, for a host of other activities, my attention is divided.

To live with our attention divided is not to live at all. Yet, we can choose otherwise. I have no idea how Peter Shintani lived his days. His last day though was unexpected; he probably thought he had many more years of life ahead of him. If we could ask him, he might tell us that his end came too soon.

Time is short for all of us. If we truly understood this, would we spend one precious moment of our life reading another article about Sarah Palin’s future, or Jon and Kate’s troubles, or Barack Obama’s greatness? Would we polish the grievances we carry in our mind as though they were precious gems to be hoarded? Would we watch hours of nightly television, while consuming snacks laden with corn syrup? Would we be waiting around for the government to create opportunities for us to use our inherent genius?

Now, this is not a call to accomplish the spectacular. The world, Helen Keller said, “is moved along, not only by the mighty shoves of its heroes, but also by the aggregate of tiny pushes of each honest worker.” If it is not our calling, we need do nothing that draws the attention of the world to us. Yet, through our simple, honest labor doing something that we love—or doing something mundane with love—we make the world a better place; and our life is happier.

Mary Oliver ends her poem “The Summer Day” with these evocative words:

Tell me, what else should I have done?
Doesn’t everything die at last, and too soon?
Tell me, what is it you plan to do
with your one wild and precious life?

This entry was posted on Tuesday, July 14th, 2009 at 12:20 pm and is filed under spirituality. You can follow any responses to this entry through the RSS 2.0 feed. You can leave a response, or trackback from your own site.

14 Responses to The Last Day of Peter Shintani